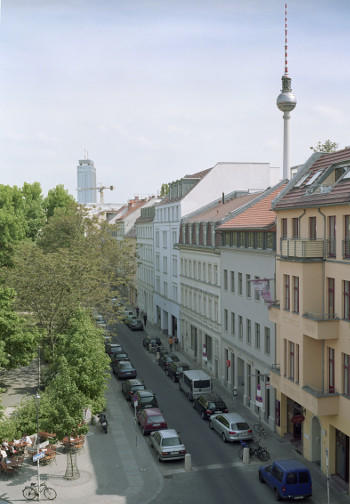 Gipsstrasse, meaning Gypsum Street, formerly called Gipsgasse, derived its name from a gypsum calciner located at house number 18 and is thus one of the oldest streets in the “Spandauer Vorstadt”, a quarter in present-day Berlin-Mitte.

Gipsstrasse 3, now the seat of the Poll Art Foundation, was the former site of Berlin’s first Catholic nursing home for the elderly, which was founded in 1780. Old and frail members of the parish were accommodated and provided for there, although medical care was not available to them.

When St. Hedwig Hospital was built in Grosse Hamburger Strasse, the nursing home at Gipsstrasse 3 was no longer needed and was given over to the Jewish community, which established the “First Israelite Kindergarten and Nursery” there in 1891 and added a classroom section to the building complex, arranged radially, in 1913.

The kindergarten had room for 164 children on a daytime basis. Until 1942 children from the neighbourhood came there, mostly from the poorer section of the Spandauer Vorstadt – towards the end above all children and young people whose parents had been arrested or deported. After all of the Jewish day-care centres and children’s homes in Nazi Germany had been closed down in 1942, the building complex at Gipsstrasse 3 was turned into the notorious collection camp for children. In the fall of 1942 all children from Gipsstrasse 3 were deported to Auschwitz.

In June 1940 the ownership of the property at Gipsstrasse 3 had to be transferred to the “Reich Association of Jews in Germany” and from there in June 1942 to the “National Socialist People’s Welfare”. It is not known how the buildings were used in the final phase of the Second World War.

In 1948 the Music School of the municipal district of Mitte was installed at Gipsstrasse 3, even before the premises became “property of the people” in 1950. It was thus one of the oldest facilities of this kind in the eastern section of Berlin.

In 1996 the property was restituted to the Conference on Jewish Material Claims against Germany, Inc., New York, USA. In 1997 the GbR Gipsstrasse 3, a company constituted under civil law, purchased the property and had it transformed into an art, publishing and atelier house according to designs by the architect Jürgen Pleuser. In June 1998 the work “KINO” by the artist Peter Friedl, which had been shown the previous year at documenta X in Kassel, was assembled as a permanent installation in the heating house located in the courtyard. The sculpture “Interrogation in Algeria” by Genni / Jenny Wiegmann-Mucchi (1895-1969) was erected in the courtyard as the most important example of GDR sculptural art of the 1950s.