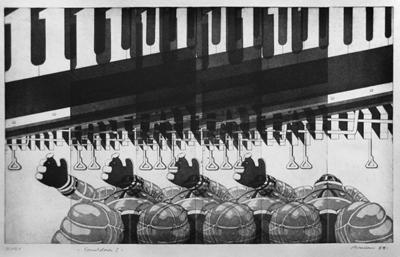 “After learning the alchemy of etching techniques under the supervision of Johnny Friedlaender in Paris, I started fabricating large-sized etchings at the art college in Berlin-Schöneberg. Large formats, not only due to Berlin’s big rooms, but also because zinc plates – usually a roofers’ tool – were cheap. (…) Even before the landing of Apollo II, I owned an etching press. Stimulated by the fantastic capsules and protective gear, I started experimenting.” (Bettina von Arnim)

All graphical prints are displayed in the Art Foundation Poll under the title countdown to mark the 75th birthday of the artist. Parallel to countdown, gallery Poll is showcasing “Die Cyborgs und Ihre Spuren 1968-1983” (The Cyborgs and their traces), including paintings and drawings, in its new exhibition space that recently opened on Gipsstraße 3. (Both exhibitions until November 21st 2015) A catalogue with contemporary texts and multiple plates was released as a part of POLLeditions (44 pages, ISBN 978-3-931759-38-4, 15 Euro). To commemorate the exhibition, the artist released her own catalogue with etchings and writing (40 pages, multiple plates, 15 Euro).

Bettina von Arnim developed an elaborate etching technique in the 60s. By using the same plaque two or three times, a serial replication of the motif, as well as an ampleness of grey and black, came into place. These nuances contour the depth of the paper.

The exhibition shows editions, unique copies, black and white, plus color etchings. Like the oil paintings, drawings and gouache from the 60s, 70s and 80s, von Arnims etchings critically address the conquest of space through the human species and the industrialization of agriculture.

Bettina von Arnim, born 1940 in Zernikow, studied in Berlin and Paris. Together with Ulrich Baehr, Hans-Jürgen Diehl, Wolfgang Petrick and Peter Sorge, she makes up the founding members of the group Aspekt (1972-1977). She has been living and working in the south west of France, since 1975. Works of the artist are located in renowned private and public collections, such as the Berlin gallery, the Deutsche Bank, the collection of contemporary art of the federal republic of Germany, the Städel museum and the art museum Bonn. The artist received new attention due to the exhibition German Pop 2014-2015, which showcased in the Frankfurter Schirn Kunsthalle.