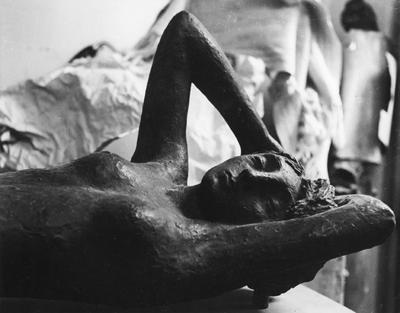 On the occasion of Jenny Wiegmann-Mucchi’s 120th birthday (1895-1969) the gallery of the Art Foundation Poll is showcasing an exhibition to give a review of sculptures and drawings from all creative periods of the artist. Affiliated with the realistic tradition of German sculptors, her work shows meager restraint and silent insistence – a “realism of cautious nuances”, as Diether Schmidt expressed accurately at the retrospective of the Berlin National gallery in 1970. Additionally, photography and two oil paintings of the Italian painter, graphic artist and architect Gabriele Mucchi (1899-2002) are being presented.

A lying nude portrait of a girl, made of bronze, takes center stage, as it was marked with the gold medal at the world exhibition in Paris in 1937. Its title Le ciel est triste et beau refers to a reoccurring motive of the poem Harmonie du Soir by Baudelaire, whose prevailing mood of melancholy percolated. At the time of the development in 1935, Jenny Wiegmann-Mucchi had been residing in her home country of choice, Italy, for a period of time, while adopting her artist’s name Genni. Due to political events she discovered her own style, which best is characterized by rational, less idealized figurativeness.

Her early work is embossed by primarily simple forms of greek-archaic art. The figures are of prim amenity, yet the faces lack the mysterious smile of antique statues. As a result of meeting the sculptor Ernesto de Fiori in 1929, Genni gradually disengaged herself from the precision of forms, though without ever fully giving up on the principle. In the 30s, the sculptor began enriching her art with realistic elements. Wiegmann-Mucchis exile stay in Paris contributed decisively to her artistic development. She abandoned the archaisms and began occupying herself with problems of the present. Unfortunately, only few of her works from the time of her emigration to Italy remain, due to the bombing of her studio in August of 1943. Some destructed sculptures have been photographed along the way and will be shown at the exhibition.

After the Second World War, the sculptor dedicated herself in particular to political topics, such as the Algerian war of liberation (Interrogation in Algeria / Verhör in Algerien, 1959), the Vietnam war (The scream / Der Schrei, 1967) or the Congolese war of independence (Lumumba, 1961). The dignity of those portrayed endures even in their deepest pain. What Genni saw in humans was fellow beings, which many of her heads and busts illustrate. No scheme of artistic abstraction covers her works, but instead it becomes a concentrated image of personality.

The sculpture Interrogation in Algeria (Verhör in Algerien) is located in the courtyard of gallery Poll and Art Foundation Poll; the plastic Lumumba is being erected on the Garnisons‘ church square (Garnisonkirchplatz) in 2013, as a project of Berlin sculptors, executed by the Art Foundation Poll.

Jenny Wiegmann-Mucchi was born 1895 in Berlin-Spandau. In 1914 she studied art, initially at the student studios of the Lewin-Funcke-school under Lovis Corinth and August Kraus, a student of Reinhold Begas. Her role models are Barlach and Lehmbruck. In 1919 she visited the arts college in Charlottenburg, where she met her first husband Berthold Müller-Oerlinghausen, whom she worked with on the accouterment of sacral rooms, after getting married in 1920. The sculptor travelled to Italy and Spain, lived in Paris for a few years. In 1933, she married the painter Gabriele Mucchi and moved to Milan the following year, where she was called Genni by all her friends. From 1943 until 1945 she fought as a Staffetta in the Italian opposition against fascism. By virtue of her husband receiving a lectureship at the art college Berlin-Weißensee, she split her work between the GDR-capital and Milan starting in 1956 and her work emerged to a greater publicity through assignments and exhibitions. In 1969, she died at the age of 74 in Berlin-Buch.