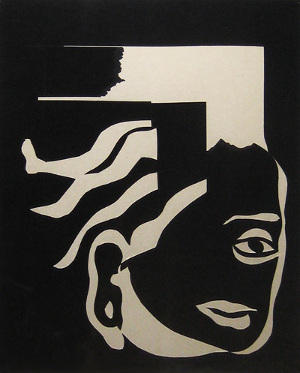 “Art is chiselling stairs in the rainbow.“

Works from various phases of Lambert M. Wintersberger are shown by the Poll Gallery and the Poll Art Foundation on the occasion of the 75th birthday of the artist. After five solo exhibitions since 1983, this sixth one attempts to draw a first balance after more than 50 years of artistic creativity of the artist, who died in 2013. In the Gallery painting is exhibited, the Art Foundation presents gouaches, watercolours and cardboard cuts.

Lambert M. Wintersberger, born on April 23rd 1941 in Munich, completed an apprenticeship as a decoration, church and glass painter in 1958 before studying at the Academy of Fine Arts of his native town from 1959 to 1961. He continued the studies at the Accademia di Belle Arti in Florence from 1961 to 1964 and changed to the University of Arts in West Berlin, where he lived as a freelance artist until 1969 and was part of the founding members of the exhibition community Großgörschen 35.  After living in Cologne (1970), the United States (1971-1972 ) and Stuttgart (1969, 1980-1985) as well as a lectureship at the Düsseldorf Art Academy (1974-1977 ) Wintersberger and his wife Dolores Helena Wyss (1946-2005 ) acquired the disused railway station of Walbourg near Haguenau in Alsace, where he lived and worked until his suicide.

“I am, because I paint, and when I paint, I am more and for others“, said Wintersberger’s self-assessment. His first gallery owner Hans-Jürgen Müller described him thus: “His element is the painting, his life the art, his audience he by himself.“

The painting always was central point of Wintersberger’s art. Inspired by the political climate in West Berlin and under the influence of the Pop Art, he started to realize there his new visual ideas in the sixties. The fragmentation of the figure is characteristic for his contour fixed, smooth early style with oversized fingers and fingernails and huge mouths from the world of advertising. This is followed by the “Verletzungen“ (injuries) in supercooled shades of grey, executed in a stereotyped way of painting: “Fesselungen“ (bondage) , “Sprengungen“ (detonation) and “Spaltungen“ (divisions) of individual body parts are shown full frame. “The pictorial perfection of his images means camouflage. Behind it there is the ticking time bomb of earthly tortures and destructions. His longing is directed towards an ideal world.“ (Hans-Jürgen Müller)

The theory discussion and the diverse content and artistic examination of the subject realism and reality in the art of the Federal Republic of Germany, which culminated in the documenta 5 and numerous thematic exhibitions in 1972, also triggered a change in the oeuvre of Wintersberger. During the work on the portraits of the seventies he already tried out his expressive painting that henceforth constituted his actual topic: The sensuality of the brushstroke, the power of colour and its effect in the image space now are playing a central role. Resin as the paint substance is replaced by oil.

Picture motives are worked through over years, work groups and motive complexes for partly banal subjects are being created, such as mushrooms, whose different varieties he reproduces relatively faithfully in a 72-piece image from 1972 to 1974, or depictions of animals. An examination of classical antiquity or Greek mythology also leads him to image subjects. In the series of the eighties, such as “China – Africa“ or “Hawaii“, Wintersberger portrays impressions of own travel experience and the subjective perception of local culture with Central European mysticism and history. In the nineties he dedicates a cycle to the “Maginot Line“ to his adopted country of France.  “Nature reality can be so overarching powerful that you have to submit to it by after-image and imitation“, so Wintersberger describes the often week-long nature studies during his journeys to America, the Caribbean, Hawaii or Bali, Italy or the neighbouring Switzerland, which he practiced like a kind of drawings and paintings diary. In addition he makes consistently excursions into the history of art with depictions of female nudes and self-portraits.

Lambert M. Wintersberger has won several awards; his works are located in important private and public collections, among others in the National Gallery of the National Museums of Prussian Cultural Heritage in Berlin, at the Art Museum Bonn, the Städel Museum in Frankfurt am Main, the Sprengel Museum Hannover and the State Gallery Stuttgart. The Poll Art Foundation also owns several works by the artist.