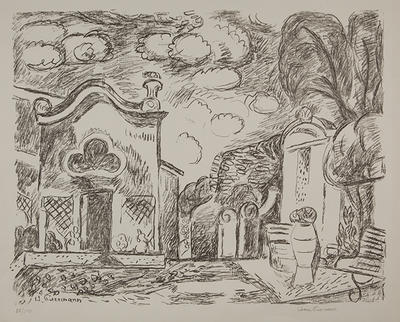 Apprenticeship in the father’s painting workshop

Studies at the Academy of Fine Arts (Akademie der bildenden Künste) Munich in the winter months, entered the drawing class of Gabriel von Hackl and later the painting class of Franz von Stuck; in the summer months he works in the paternal enterprise

Half-year stay in Berlin, becomes member of the Berlin Secession on the suggestion of Max Liebermann

Move to Paris, where he, among others, makes acquaintance of Pablo Picasso and Henri Matisse

Founding of „Académie Matisse“ in Paris: Matisse acts as teacher, Purrmann as chairman, responsible for organization and administration

Return to Germany, forced by the First World War

Is supervised by the Gestapo and has to flee from Germany, the managing board of the „Villa Romana“ Foundation is making sure that Purrmann takes over the management of „Villa Romana“ in Florence

Finds in Montagnola /Tessin a new home, where he, among others, makes acquaintance of Hermann Hesse

Temporary returns to Germany, memberships in the Pfälzische Secession and the Deutscher Künstlerbund (also as jury member)