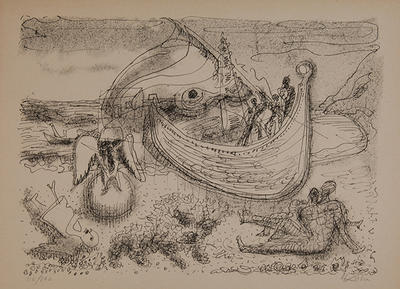 Stay in Paris, judged the Académie des Beaux-Arts as a „cemetery of art“, and finally student at the private Académie Ranson with Roger Bissière

Move from Florence to Rome, where he rented a studio in the Via di Porta S. Pancrazio 7

Encounter with De Chirico in Rome

Stay in Berlin, at the end of the year decision to move there

First major post-war exhibition of French modern art in Baden-Baden, first encounter with Aenne and Franz Burda, which are among his most important collectors

Participation in the Venice Biennale

Emeritus at the Universität der Künste (University of Arts) in Berlin

Died after a long illness on 12 December in Baden-Baden