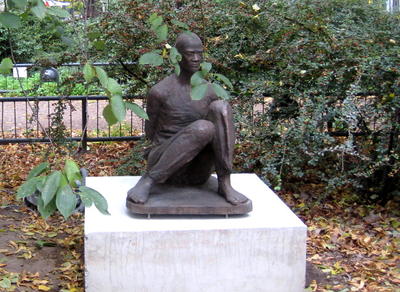 Born as the daughter of the pastry chef Fritz Wiegmann and Paula, born Voigt, in Berlin Spandau

Visit of the College of Arts Berlin-Charlottenburg, wood sculpture class with Hans Peratoner

Plasterwork in the Marian Chapel in Oerlinghausen

Stay in Rome. Work for the exhibition in the Vatican mission to the Holy Year 1925

Return to Berlin, exhibition at the Art Salon Fischer, Bielefeld

Stay in Hagen (Germany), Francis relief on the facade of the new Franciscan church

Participation in the International exhibition „Painting and Sculpture“, New York

Travel to Spain and Italy

Work in Berlin, exhibitions at the Academy of Arts in Berlin Secession, together with Berthold Müller in museums in Bielefeld, Kassel, Cologne, Utrecht etc.

Stay and work in Paris, marrying Gabriele Mucchi, move to Milan, large figure „Girls in the Sun“ for the Triennial

Permanent stay in Milan, exhibition at the Venice Biennale, works for the Milan Triennale

Gold Medal at the World Exhibition in Paris

Bas-relief on the tomb Pino, Parabiago

First trip to Berlin after the war

Belongs to the group of Italian realists

Lessons for metal at the Scuola Umanitaria, Milan

Changing stay in Milan and Berlin

Monument to the Fallen Partisans of Bologna

On 2 July Genni / Jenny Wiegmann-Mucchi died in Berlin-Buch, she is buried in the cemetery beside the grave of Frederick field Käthe Kollwitz